These Are the Most Iconic and Expensive Royal Wedding Dresses

Having the right wedding dress is the most important decision a bride has, and when the eyes of the world are all pointed towards you, this important decision is that harder and crucial. The world has been blessed with many royal weddings over the decades, and we will now explore some of the best and most glamorous wedding gowns royal brides wore for their important day. 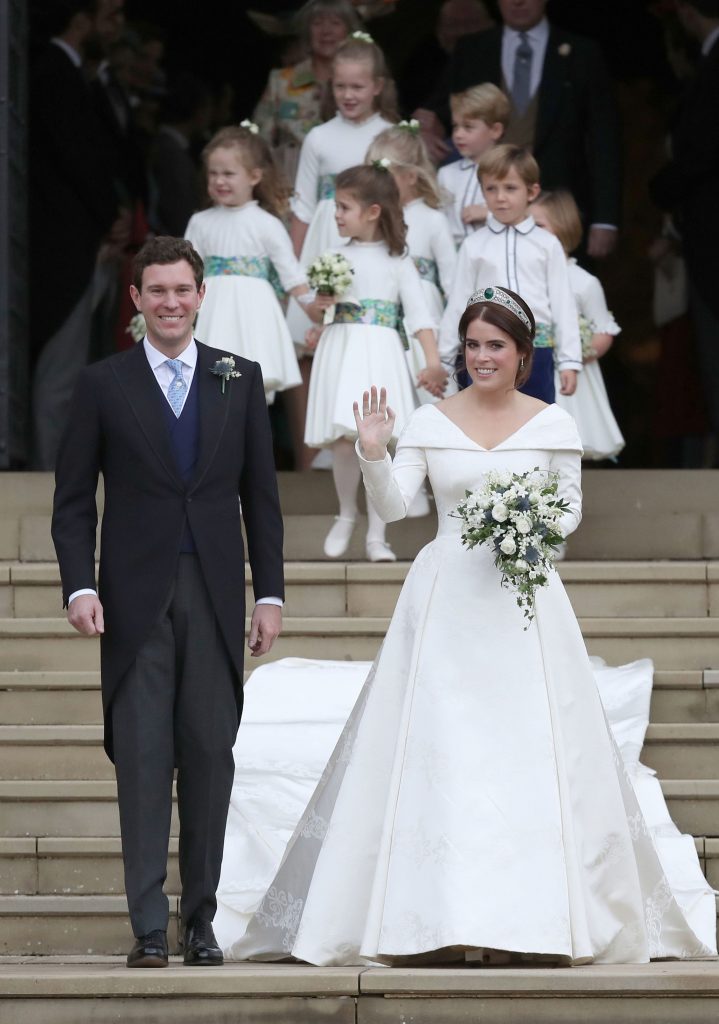 Everyone was excited when Princess Eugenie first appeared in her stunning wedding gown. Her elegant dress was made by the British designers Peter Pilotto and Christopher De Vos. It had a deep V neck and off the shoulder design, as well as a beautiful bustle in the back. The fabric had many symbols meaningful to Princess Eugenie in some way, most notably a Thistle for Scotland that acknowledged the fondness for Balmoral Shamrock as a tribute to the Ferguson family. It also had the York Rose, and ivy representing that represented their home. Eugenie did not have a veil but instead wore a Greville Emerald Kokoshnik tiara, from the collection of the Queen Mother. 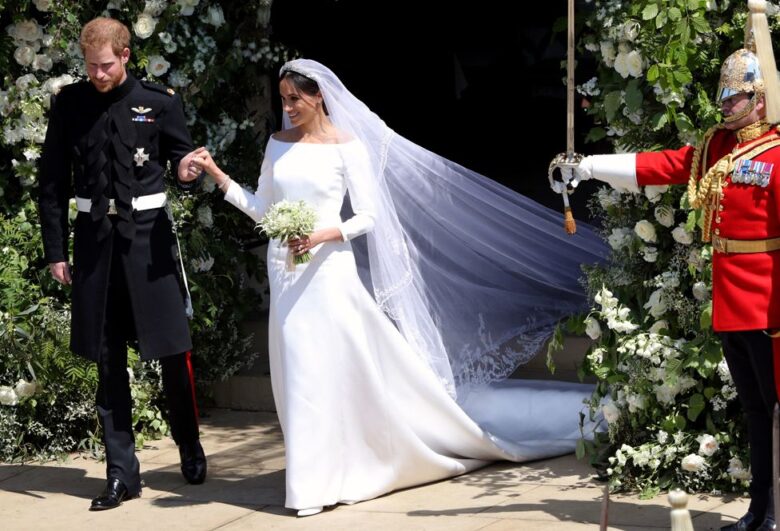 After many months of fan speculation, Meghan Markle revealed Clare Waight Keller of the iconic Parisian fashion house Givenchy will design her wedding dress. She wanted a slim-fitting and bateau-neck gown with sleeves, as well as a beautiful veil. The designer shared much about her work, “It is truly an honor to have been given the opportunity to closely collaborate with Meghan Markle on such a remarkable occasion. We wanted to create a timeless piece that would emphasize the iconic codes of Givenchy throughout its history, as well as convey modernity through sleek lines and sharp cuts. In contrast, the delicate floral beauty of the veil was a vision Meghan and I shared, a special gesture embracing the commonwealth flora, ascending the circumference of the silk tulle.” 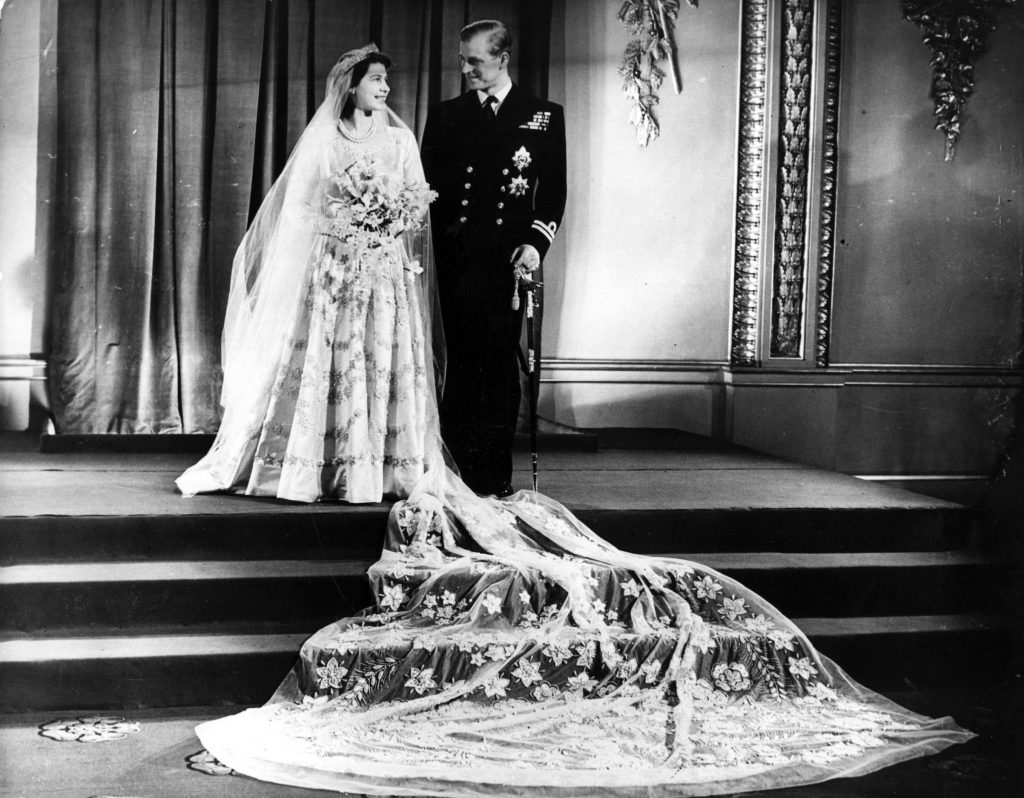 British couturier Sir Norman Hartnell was a task with designing the Queen’s bridal gown, and his aim was to come up with “the most beautiful dress” of his career. Her Majesty was Princess Elizabeth at that time, and she wore an ivory silk masterpiece decorated with crystals and an unreal number of 10,000 seed pearls. It also featured a 15-foot star-patterned train that was woven in Braintree in Essex. This was inspired by the famous Renaissance painting “Primavera” by Botticelli. This masterpiece symbolizes the rebirth and growth that comes after the war. The Princess had to collect clothing coupons in order to pay for the dress because Britain was still in a state of rationing in November of 1947. 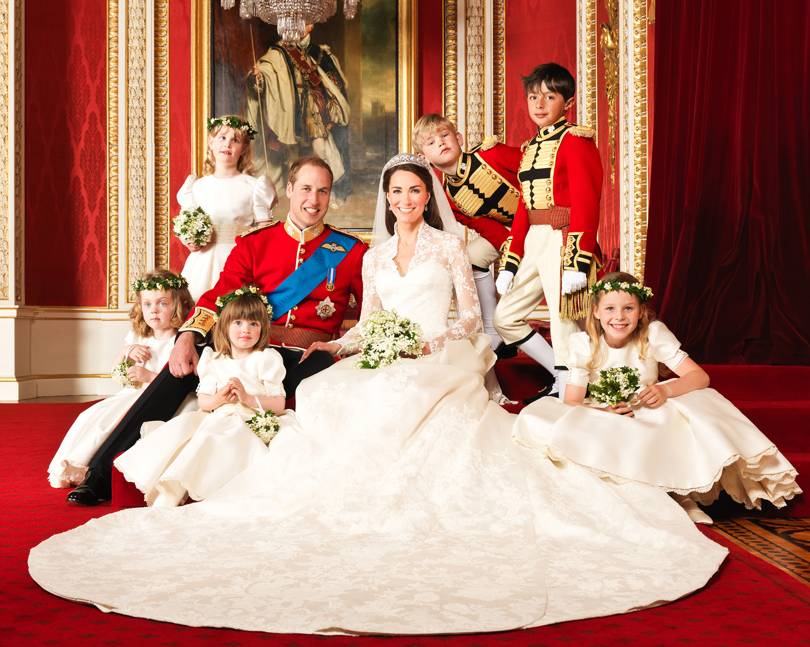 The Duchess of Cambridge wanted to combine modernity with tradition with her stunning gown. The marvelous dress was the product of designer Sarah Burton of Alexander McQueen. What she had come up with was an exquisite creation featuring a nipped in waist, lace sleeves, many floral motifs, as well as a flowing skirt and train. Kate looked gorgeous that day in 2011. 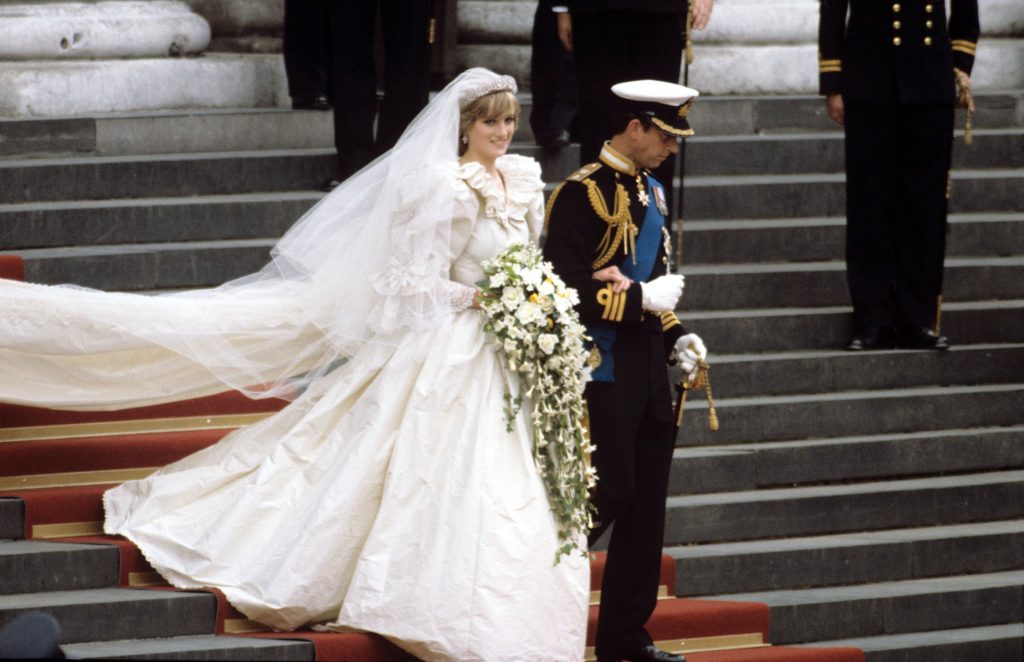 Lady Diana’s record-breaking long train at the back of her David and Elizabeth Emanuel dress was a tight fit, as she was transported in a glass coach to her wedding. Her father had a rough and tough job squeezing in the 7.62m of its interior. As a result, there were visible wrinkles in the dress when she arrived at the cathedral, and the train was somewhat crushed. There is even a story that Diana spilled some of her perfume on the dress while getting ready! The woven silk taffeta was a work of art by Stephen Walters from Suffolk. If any details of the dress had been leaked, prior to the wedding, there was also a back-up dress just in case. Even though they had difficulties, nobody could tell during the beautiful and heartwarming ceremony. 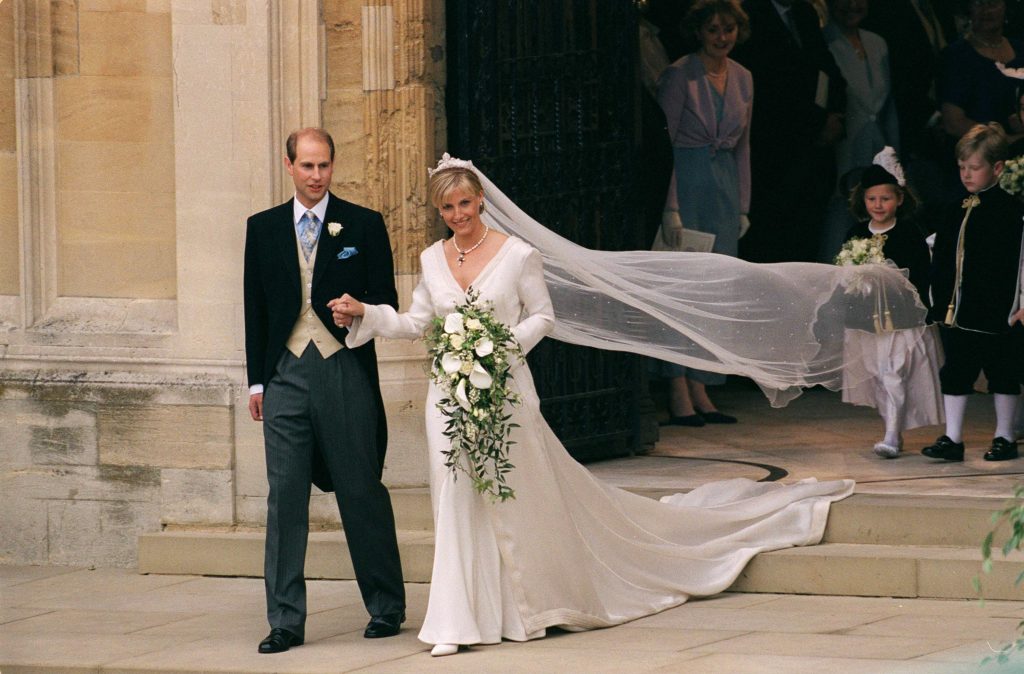 Five months after the engagement, Prince Edward of Britain and Sophie Rhys-Jones were married in St George’s Chapel on Saturday 19 June 1999, and the former PR wore a simple ivory silk and organza dress coat, made by Samantha Shaw. It had a total of 325,000 crystals and pearls fastened along the neck, full sleeves, and a train. There was also a corseted V-neck gown and a cathedral-length veil involved, detailed with even more crystals. Lastly, a diamond tiara from the private collection of the Queen was in her hair. Sophie also wore a black and white pearl necklace and matching earrings that Edward designed and gifted her as a wedding gift. 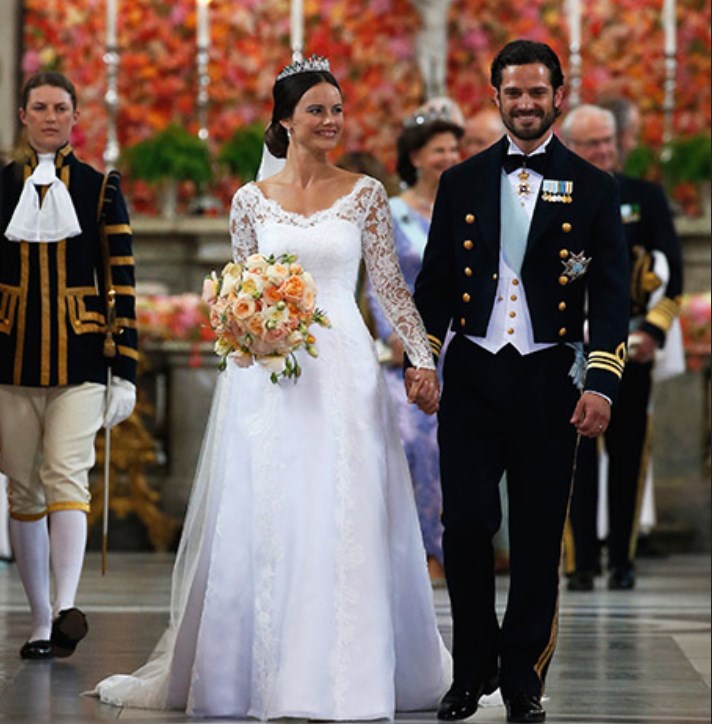 Princess Sofia married Prince Carl Philip of Sweden on a Saturday in June of 2015. All eyes were on stunning brunette while she was stepping out in her show-stopping wedding gown from silk crepe, overlaid with Italian silk organza. This bridal gown was created by a Swedish designer Ida Sjöstedt, and it featured an intricate couture lace by José María Ruiz, while the beautiful train was cut and stitched by hand in the atelier in Stockholm. Three shades of white were used for the gown. 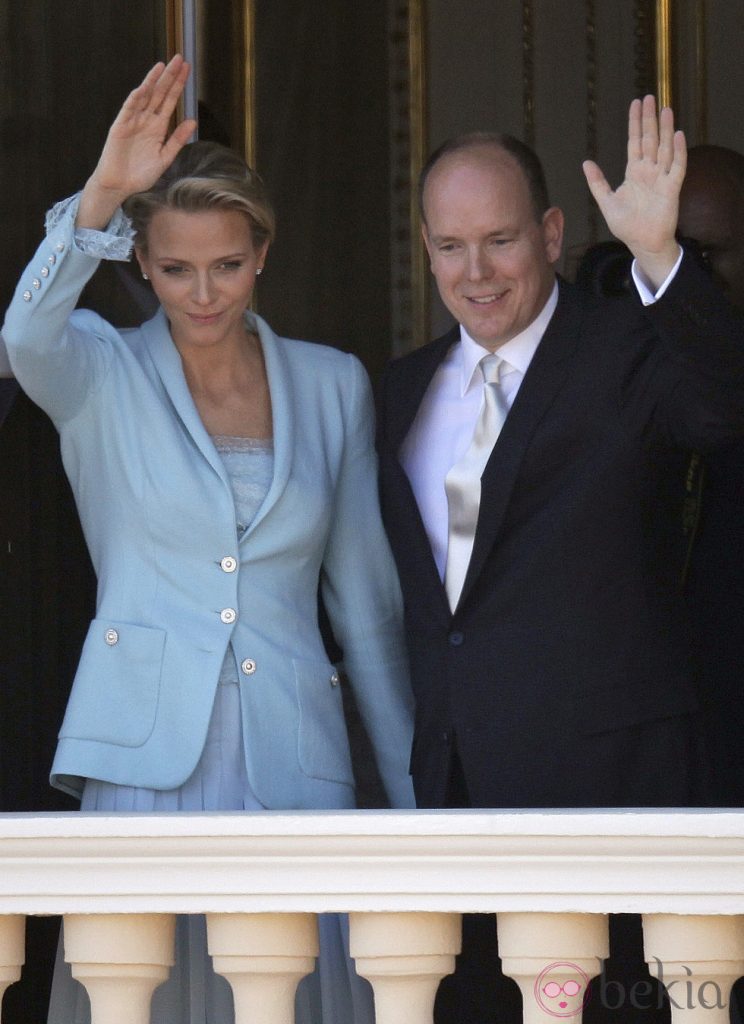 Albert and Charlene first met in 2000 and were married 11 years later in the Throne Room of the royal palace. Charlene looked absolutely princess-perfect for her big day. She wore a beautifully cut sky blue dress, for what was her first appearance as a royal on the balcony of the palace. A new sovereign princess had not greeted the people of Monaco in 55 years from that spot.

Fashion commentators dubbed this color “Charlene blue”, after which the princess explained: “It’s a collaboration between me and Karl Lagerfeld. We wanted something to match the color of my eyes. It’s my creation, and I’m proud of it.” The Giorgio Armani bridal gown was simple but dazzling. The dress was in work for months and was cut from 130 meters of silk, adorned with 40,000 crystals, and embellished with 20,000 pearl teardrops.

9. Queen Máxima of the Netherlands

The bride of Willem-Alexander got her perfect wedding gown from one of the top designers in the world. Princess Maxima married her love on February 2, 2002, in Amsterdam, while wearing a Valentino couture long sleeve ivory gown that had a train inset embroidered with flowers. Her tiara was a piece specially designed and created for this occasion. The base was taken from another owned by Queen Emma, while the stars are from a third tiara owned by Emma’s daughter, Queen Wilhelmina, the grandmother of Queen Beatrix. 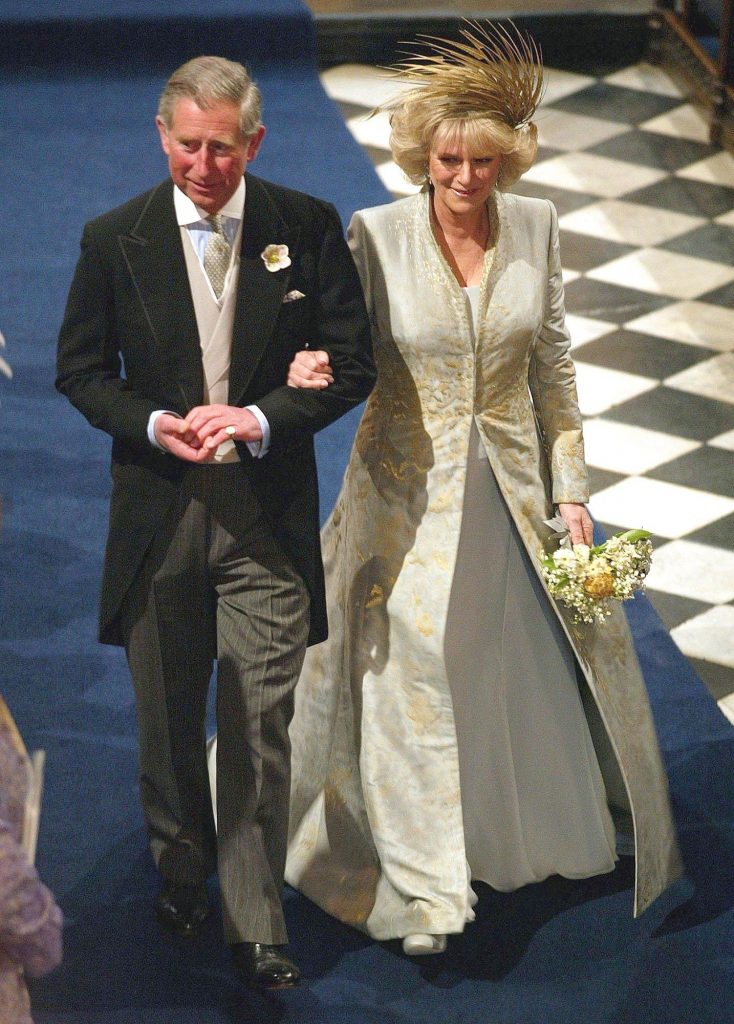 The Duchess of Cornwall appeared in an elegant white coat and a matching scalloped edged dress, courtesy of Robinson Valentine. Her wedding ceremony to Prince Charles took place in April of 2005 at Windsor’s Guildhall. In June 2007, the Duchess showed up in that same dress for the opening of the National Assembly of Wales. Camilla opted for another wide-brimmed hat instead of a wedding hat and wore a triple string of pearls and different shoes. The same diamond brooch that featured the Prince of Wales feathers was present as well. Camilla is still the only royal who recycled her wedding dress look for a separate occasion. 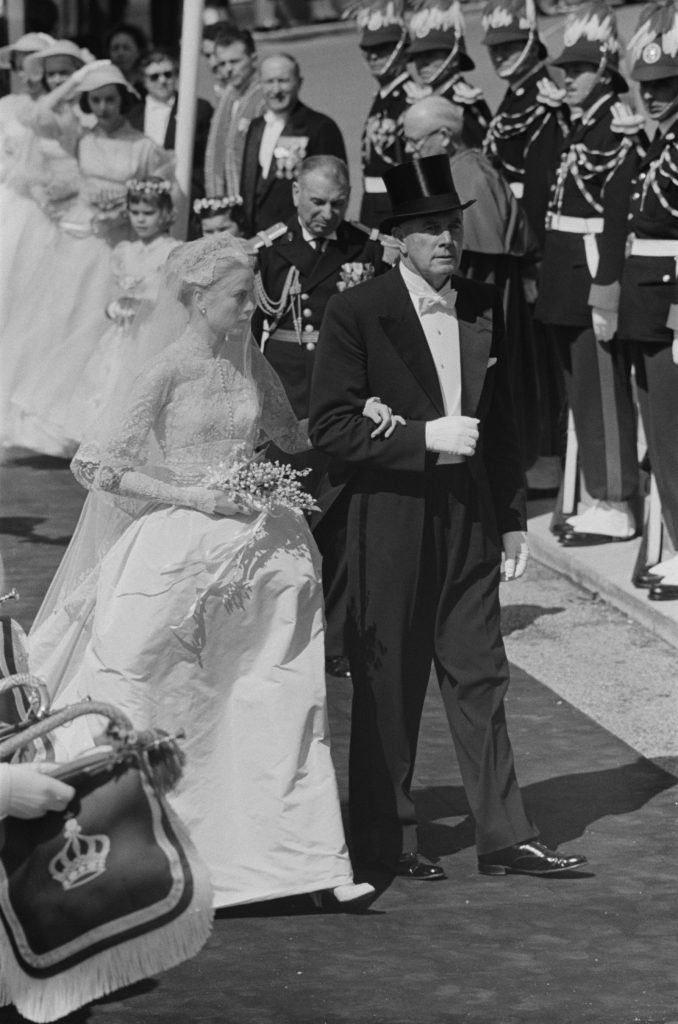 The Hollywood diva wore a wedding gown designed by Helen Rose of MGM, which was the epitome of a fairytale romance that transformed the movie star into a true European royalty. Her dress was much more complex than it initially looked, because underneath the sheer lace bodice was a strapless dress, made from silk crepe. The three layers of integrated petticoats gave her skirt volume, while the fabrics included a range of expensive materials including silk tulle, delicate Valenciennes lace, pearl-encrusted rose point lace, and peau de soie satin. 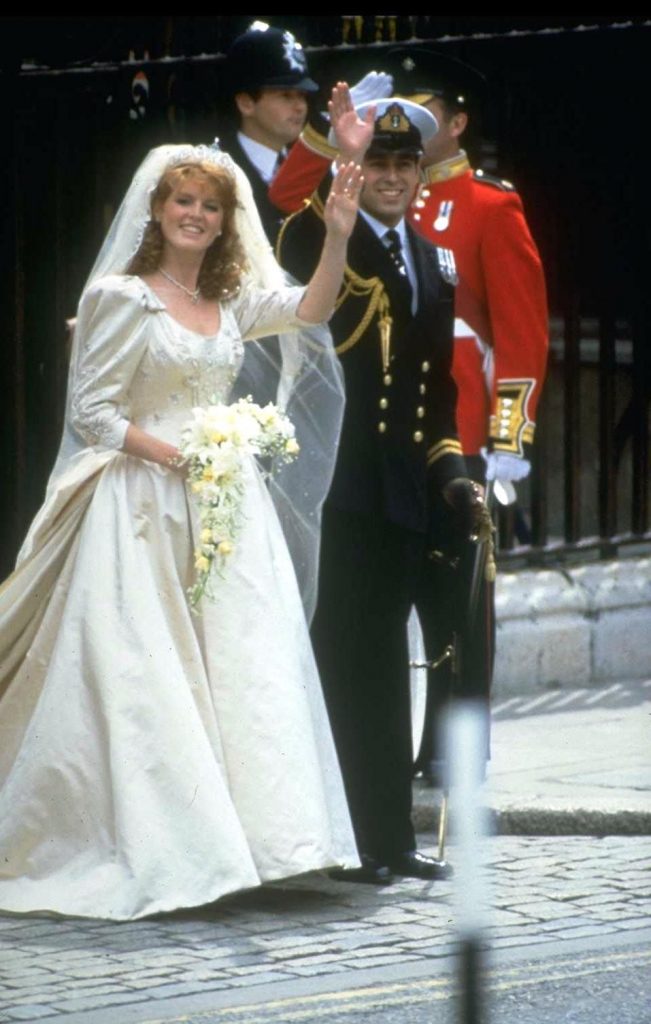 Sarah Ferguson had an ivory duchess satin dress for her wedding to Prince Andrew, the Duke of York, at Westminster Abbey on July 23, 1986. Interestingly, she designed the dress herself, and it featured a long train, fitted bodice, and a scooped neckline. There was a letter ‘A’ embroidered in a visible spot on the dress. 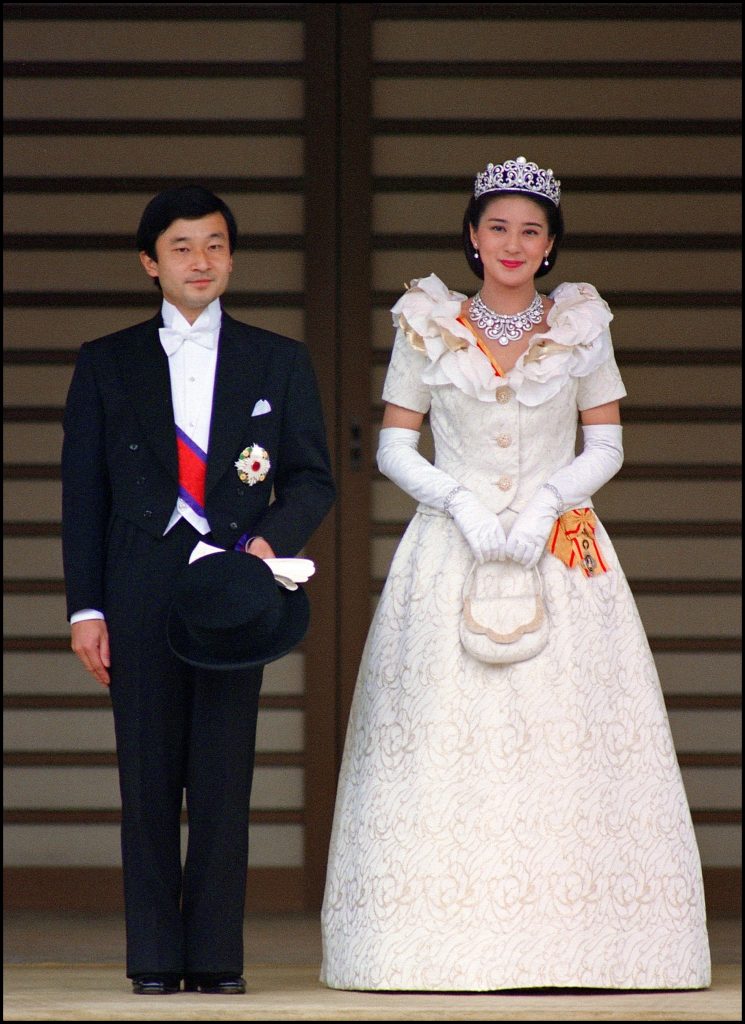 Harvard graduate Masako Owada was inducted into the Imperial Family of Japan, on June 9, 1993, after her wedding to Emperor Akihito and Empress Michiko’s firstborn, Crown Prince Naruhito. For a traditional Shinto ceremony, she wore a traditional silk bridal kimono made from a dozen layers, that weighed an incredible 14 kilograms had a price tag of $100,000. Masako finished her attire off with an elegant pair of long gloves and a beautifully set of decorative jewelry, including an ornate diamond tiara and a beautiful necklace. 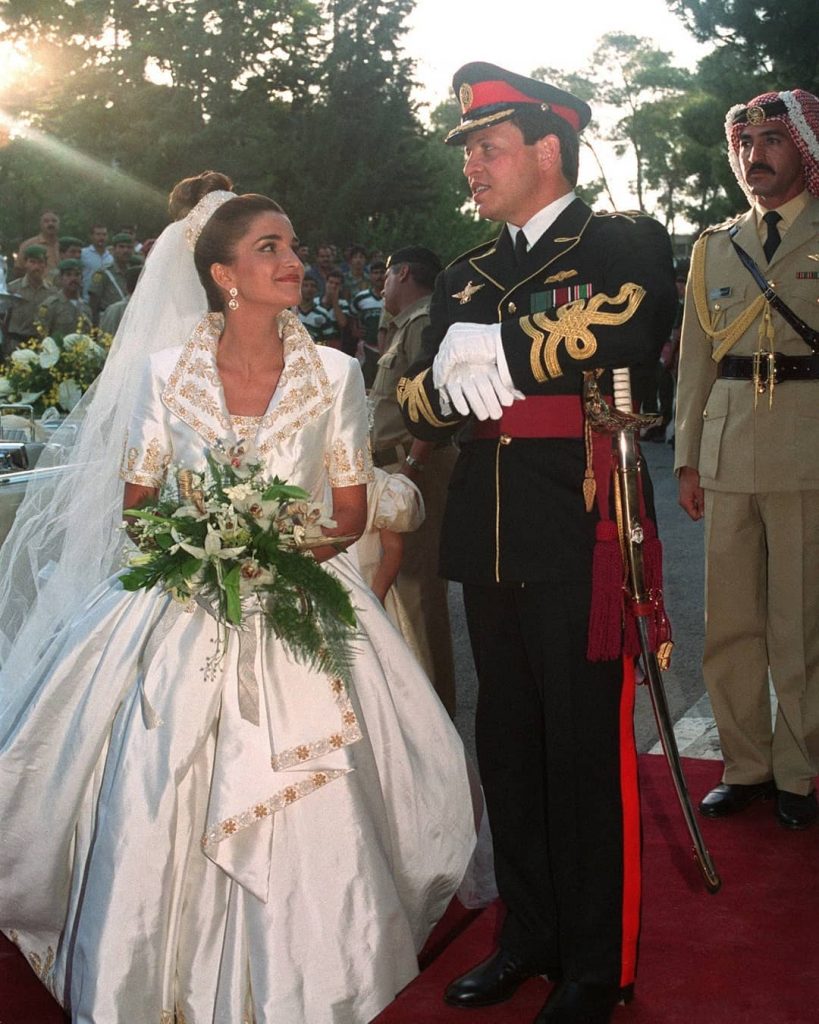 Only five months after meeting her handsome future husband during a dinner party, Rania Al-Yassin married the prince and later king of Jordan, Abdullah bin Al-Hussein, at a stunning ceremony on June 10, 1993. The beautiful bride became a queen in March of 1999, and she wore a wedding gown designed by the famous Lebanese designer Elie Saab. 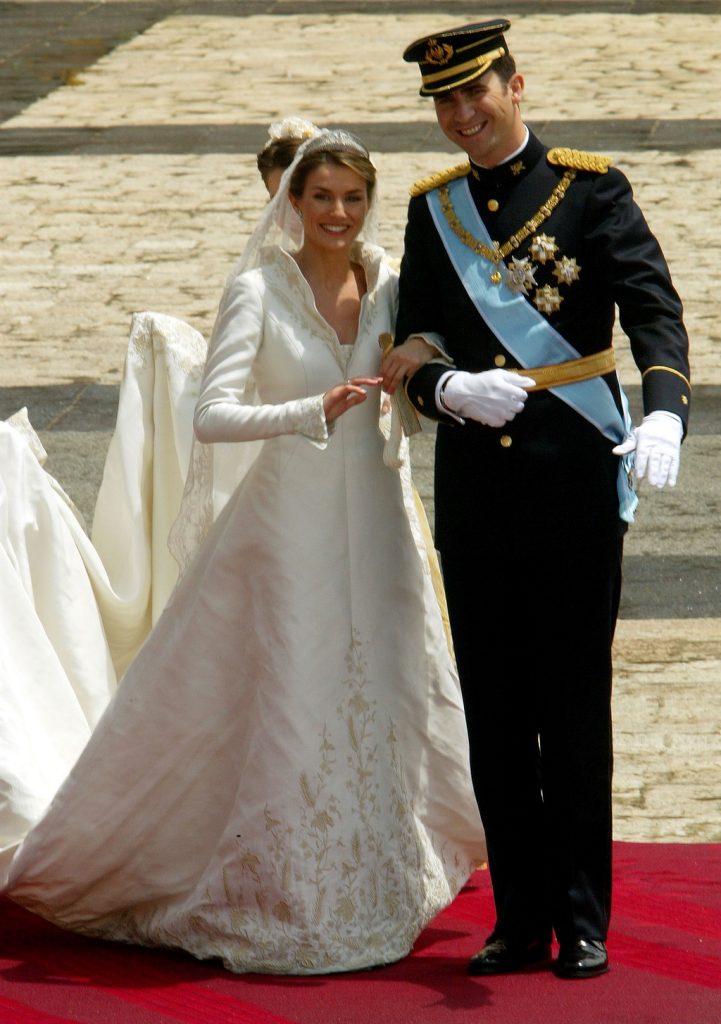 Letizia Ortiz Rocasolano married the Crown Prince of Spain Felipe in a traditional Roman Catholic ceremony on May 22, 2004. The former journalist wore a wedding gown made by the Spanish designer Manuel Pertegaz, which featured an impressive train, a fitted bodice, and an unusual high collar. The bride looked gorgeous that day. 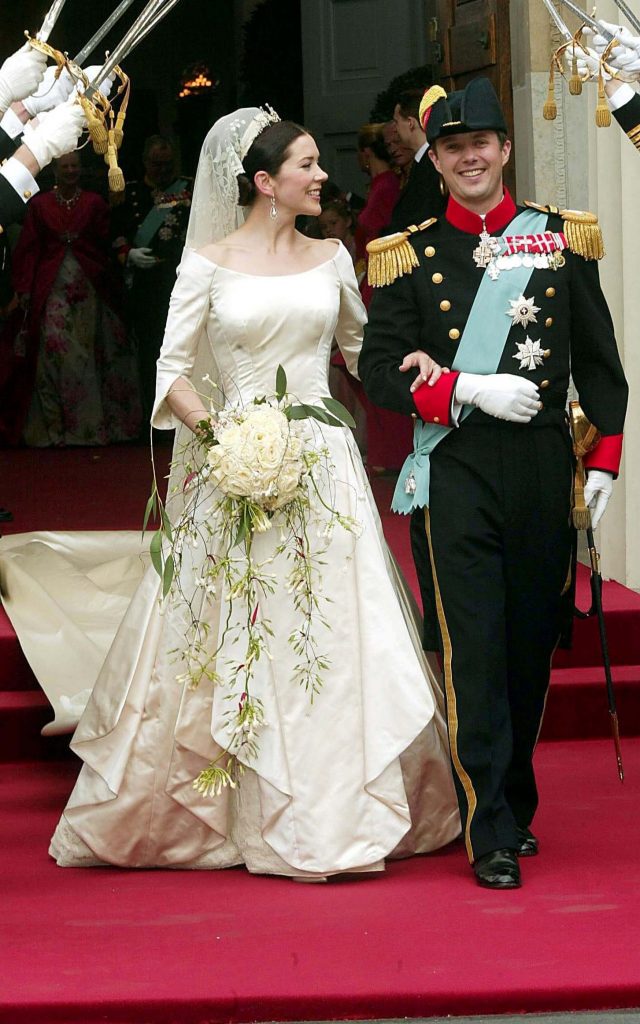 Crown Prince Frederik married Mary Donaldson on May 14, 2004, at a ceremony at the Church of Our Lady in Copenhagen, Denmark. Her wedding dress was a piece of art by the Danish designer Uffe Frank, who used ivory duchess satin and paired it with a scoop neckline. This amazing design featured also featured a slim-fit bodice and lily sleeves. 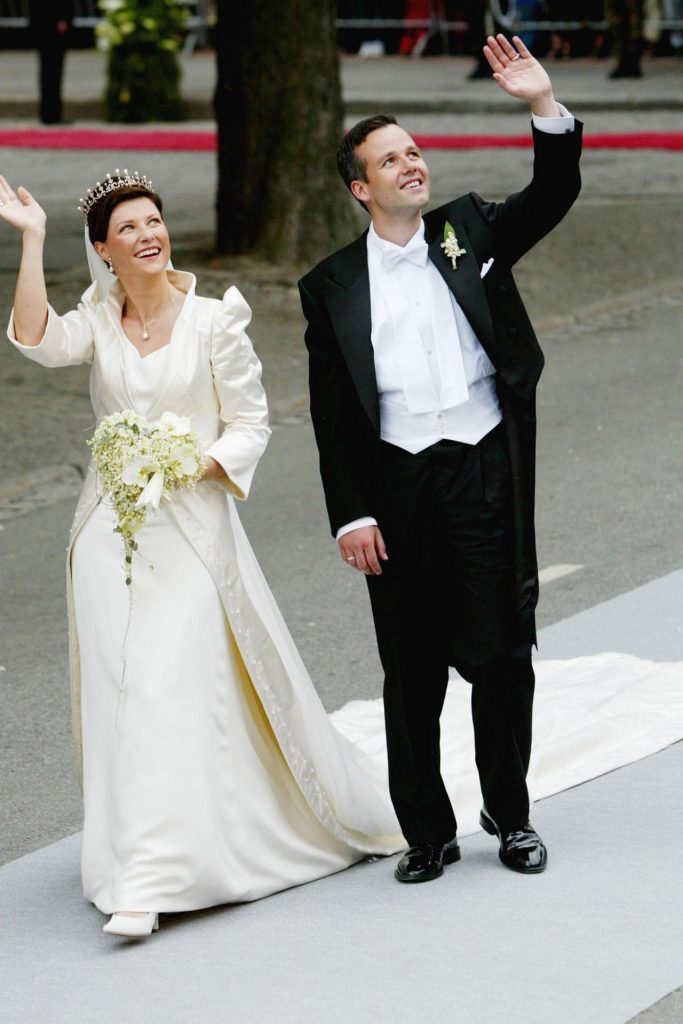 The princess married the author Ari Behn in May of 2002 while wearing a two-piece wedding outfit of a dress and a jacket, designed by an Oslo designer Wenche Lyche. This look was inspired by the shape and color of the Martha lily. The jacket was embroidered with Swarovski crystals, and made of off-white duchess satin, while the three-meter train formed a pointed arch. The wedding gown was a white silk crepe. The bride also had a bouquet of lilies and held her veil with a tiara owned by Queen Maud. 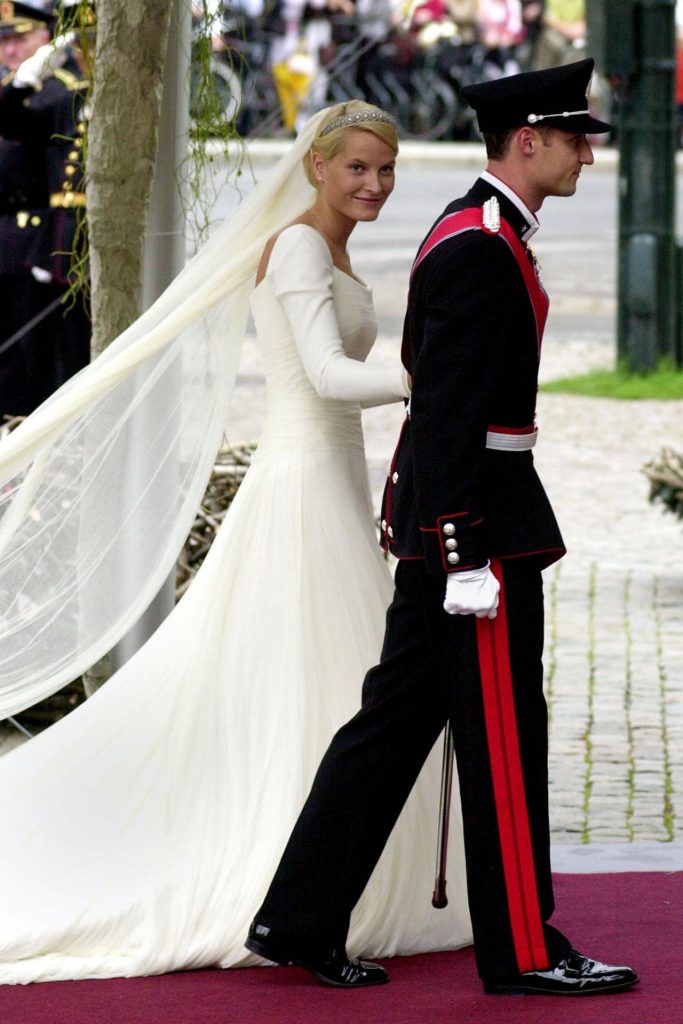 The Crown Princess of Norway Mette-Marit wore a stunning wedding dress, which was inspired by the one that the great grandmother of Crown Prince Haakon, Queen Maud wore for her wedding back in 1896. Mette-Marit’s dress was the work of designer Ove Harder Finseth and seamstress Anna Bratland. They used thick silk crepe and draped in soft silk tulle. The dress had a bodice and a flared skirt, while the train reached two meters in length. Her veil was made from six meters of silk, and on her head was a beautiful antique tiara, a gift from her in-laws, Harald and Sonja. That day, on August 25, 2001, in the Oslo Cathedral, Princess Mette-Marit looked stunning.

The Most Beautiful and Breathtaking Royal Wedding Cakes in History

A biography of Catherine Middleton

What to Look for in a Banquet Hall...

5 Ways to Include Your Dog On Your...

5 Creative Things Your Wedding Invitations Can Include