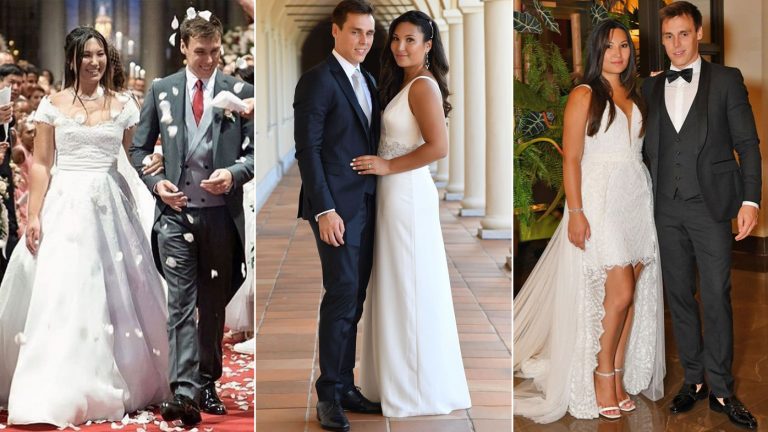 The newly married couple grandson of Grace Kelly, Louis Ducruet and charming Marie Chevallier took their wedding vows on July 27th, 2019 in Monaco, and here are the details from the royal ceremony!

Where did the royal wedding happen?

This year in Monaco is reserved for special events and royal ceremonies since the recent wedding was held in honor of Charlotte Casiraghi and her long – term partner Dimitri Rassam. It opened the door to other celebrations such as the one of groom Ducruet and bride Chevallier.

The longtime partners, Loui and Marie, wanted a private party, with close family and friends. Moreover, the couple had two ceremonies. The private party was held at the Monte Carlo Bay Hotel.

The first official step that the young couple took was at Prince’s Palace in Monaco, where they had a civil ceremony guided by Monaco mayor Geroge Marsan.

The second royal ceremony happened at Monaco’s Cathedral, and it is the first royal wedding organized there since the famous wedding of Grace Kelly and Prince Rainier in 1956. We all know what impact the royal wedding of legendary Hollywood actress and the prince of Monaco had on the public. The royal wedding still holds a status for the most iconic weddings of the 20th century.

Therefore, the young couple chooses the same location because of the history and importance that it has for Loui’s family. Young groom says how the site for the wedding was extraordinary. Regarding his close bond that Louis had with his grandfather, it is logical that the royal wedding will happen there.

As we mentioned, the wedding was in the Cathedral of Monaco. Bride Marie arrived in front of the Cathedral in a retro Rolls – Royce car, decorated with pale pink and white flowers.

From the inside, the melody of the popular song ”Hallelujah” from Leonard Cohen was welcoming guests upon their arrival.  After the couple entered the Cathedral, they were greeted by Pere Cesar Penzo, an 92 years old priest who served his grandfather’s royal wedding too.

Newly royal bride was wearing two different custom made designes for two ceremonies. For the civil ceremony she decided to go with something creative and unusual. Marie wore a white silk jumpsuit designed by Rosa Clara. Marie looked astonishing in the non – traditional wedding suite.

However, for the official ceremony at the Cathedral, Marie had a custom made wedding dress that is designed by her new sister in law, Pauline Ducruet.

After the ceremony was over, Louis and Marie placed flowers at the tombs of Grace Kelly and Prince Rainier. Later, they had a private wedding party where photographs were not allowed. The couple annonuced that the party is going to be only for family and closest friends.