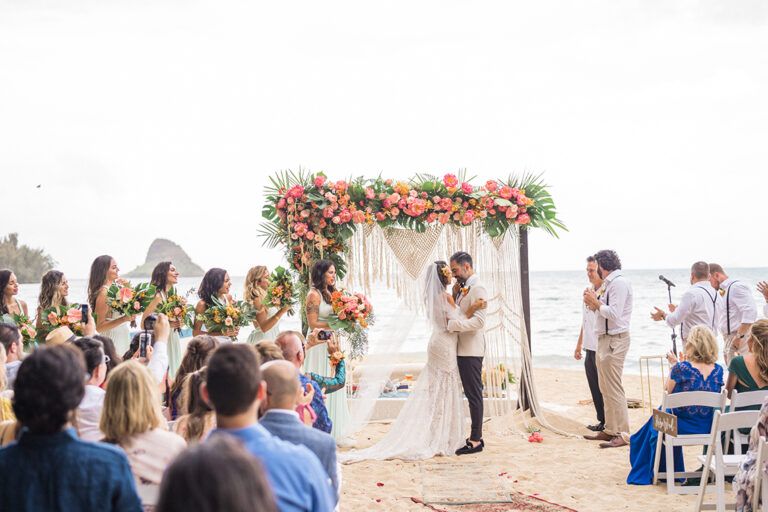 A Hawaiian wedding is like an explosion of good vibes and good feelings but multiplied by a thousand. Not only are you the one who preaches the Hawaiian spirit, but also your partner!!! My God, the stars have come together and you haven’t given it the importance it deserves. Probably if you read this article and see all the emotional charges that a more traditional Hawaiian wedding ritual has, you may understand me better.

The Ceremony of a Traditional Hawaiian Wedding

The ceremony of a more traditional Hawaiian wedding has a series of “rituals” that we are going to try to explain to you so that, if you want to replicate it on the closest beach you have, you can do it with all the respect that Hawaiian culture deserves (or any culture).

And we say this because usually Hawaiian weddings are celebrated on the beach since, for Hawaiians, the sea has a special meaning. As data, we will say, that according to Polynesian tradition, the wedding had to be celebrated on the eleventh night of the month and it came to an end when it was dawn.

The person in charge of officiating the ceremony is the Kahuna, who is like a priest, teacher, or counselor. In case you want to officiate a Hawaiian wedding in your style because you simply like its culture and tradition, this role can be done by anyone you think you trust. Although if you want to “comply” to the maximum with the tradition you should know that you will have to sing a mele (song) while the groom arrives.

The musical part or soundtrack of a Hawaiian wedding is divided into several parts. Perhaps the most important is the quintessential wedding song, Ke Kali Nei Au – “Waiting for You”. This wedding song is played to lead the bride and groom to recite their vows.

Another of the important parts where sounds and music become important in a traditional Hawaiian wedding is when the bride arrives. At that moment some conch shells announce their arrival. These shells are used to call the earth, sea, air, and fire as witnesses.

And the last part where music matters at a Hawaiian wedding are at the banquet and afterward. There, the music of ukuleles, slacks guitars and other traditional Hawaiian music takes center stage.

Another of the most important moments of a Hawaiian wedding is the exchange of Leis or Hawaiian garlands. Here there is the figure of the godfathers of garlands. They are like traditional godparents but they are in charge of holding the wedding leis of the bride and groom and their parents.

When the bride arrives at the altar accompanied by her father, the godmother hands her the groom’s garland so that she can place it on her fiance’s shoulders. The groom then takes the garland from the best man and places it on the bride. Next, the garlands of leis are put on the parents of the groom and the bride. Each to the parents of their partner. According to alohaislandlei.com, usually, these garlands are a maile lei for him and pikake lei for her.

And the most important is Haku Lei. It is like the veil in western culture. The Haku Lei is a flower crown made from pikake, a Hawaiian flower.

The Ritual of the Sand

Another of the most important and emotionally charged rituals in a Hawaiian wedding is the hourglass ritual. It consists of pouring sand of two colors into a bottle where each color represents each of the bride and groom. In the Hawaiian tradition, the sand had to come from the place of origin of each of the bride and groom, thus symbolizing the union of the two lands.

Every experience, challenge, or situation that they will overcome in life was represented in those grains of sand. Usually, this ritual is performed at the end of the ceremony.

The Bride and Groom’s Clothing

The couple usually wears white. They wear a long dress (holuku) and they usually tie a kind of belt or string around their waist, usually red.

And we got to the open bar… Just kidding, the Hawaiian wedding decoration does not only consist of the decoration of the banquet, you also have to decorate the place of the ceremony. Usually, the bride and groom are married in a circle of tropical flowers called the circle of love. A circle of a little less than 2 meters in diameter delimited by flowers and where the bride and groom exchange vows.

The banquet or Luau (beach party) is usually decorated with white linen tables with very colorful fruit centers. Palm leaves, torches … Of course, all kinds of colorful flowers mixed with the whites of the beach sand and tables.

As the last recommendation, we will tell you that, to find ideas about Hawaiian weddings leis, sites like www.flowerleis.com and Pinterest and its search engine are wonderful. There you will find many ideas for table centerpieces, as well as for the banquet in general, the ceremony.

We probably leave things behind and add things. But for a Happy Hawaii-style wedding we think it is enough. That is, we respect the Hawaiian culture to the maximum and adapt it to our means and possibilities since sometimes, it is a bit difficult to replicate everything.