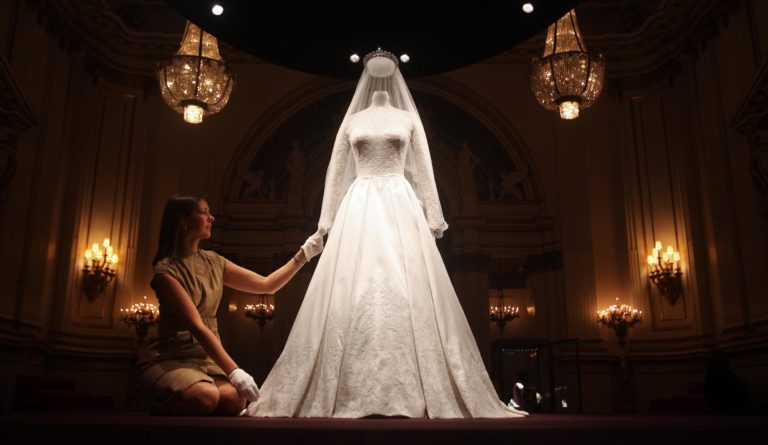 The Duchess chose British brand Alexander McQueen for the beauty of its craftsmanship and its respect for traditional workmanship and the technical construction of clothing.

The Duchess of Cambridge’s wedding dress, designed by Sarah Burton for Alexander McQueen, will go on display at Buckingham Palace during the annual Summer Opening (23 July – 3 October 2011). The Duchess chose British brand Alexander McQueen for the beauty of its craftsmanship and its respect for traditional workmanship and the technical construction of clothing. Her Royal Highness worked closely with Sarah Burton in formulating the design of her dress.
The dress is made from ivory and white satin-gazar (stiffened organza). The shape of the skirt, with arches and pleats, echoes an opening flower, and the ivory satin bodice, which is narrowed at the waist and padded at the hips, draws on the Victorian tradition of corsetry – a hallmark of Alexander McQueen’s designs. The back of the dress is finished with 58 gazar- and organza-covered buttons fastened by Rouleau loops. The underskirt is made of silk tulle trimmed with Cluny lace. The train measures 2.7 metres.

The Duchess’s wedding dress reflects the work of skilled craftsmen and women from across the United Kingdom. The lace appliqué for the bodice and skirt was hand-made by the Royal School of Needlework, founded in 1872. The lace was produced using the Carrickmacross lace-making technique, which originated in Ireland in the 1820s. Individual flowers were hand-cut from lace and hand-engineered on to ivory silk-tulle to create a design that incorporates the rose, thistle, daffodil and shamrock. Each lace motif, some as small as a 5-pence piece, was applied with minute stitches every two to three millimetres.

The bride’s veil, made of layers of soft, ivory silk-tulle with a trim of hand-embroidered flowers, was also embroidered by the Royal School of Needlework. The veil was held in place by the Cartier ‘Halo’ tiara, which was lent to The Duchess by The Queen. The tiara is formed as a band of 16 graduated scrolls set with 739 brilliants and 149 baton diamonds, each scroll being divided by a graduated brilliant with a large brilliant at the centre. The tiara was made in 1936 and purchased by The Duke of York (later King George VI) for The Duchess of York (later Queen Elizabeth The Queen Mother) three weeks before he succeeded his brother as King. The tiara was presented to Princess Elizabeth (now The Queen) by her mother on the occasion of her 18th birthday.

The Duchess’s wedding shoes, hand-made by the team at Alexander McQueen, of ivory duchesse satin and lace embroidered by the Royal School of Needlework, will also form part of the display, as will the diamond earrings worn by The Duchess on her wedding day. Commissioned by the Middleton family as a personal gift to the bride from her parents, they were created by the London-based jewellers Robinson Pelham. The design, of stylised oak leaves with a pear-shaped diamond-set drop and a pavé-set diamond acorn suspended in the centre, was inspired by the Middleton family’s new coat of arms.

To complement the wedding dress display, The Duke and Duchess’s wedding cake created by Leicestershire-based cake designer Fiona Cairns will be shown in the State Dining Room. The multi-tiered traditional fruit cake was hand-made using British ingredients and decorated with sugar flowers.

The Duchess of Cambridge’s wedding dress and the royal wedding cake will be on display as part of the Summer Opening of Buckingham Palace, which also includes the special exhibition Royal Fabergé.