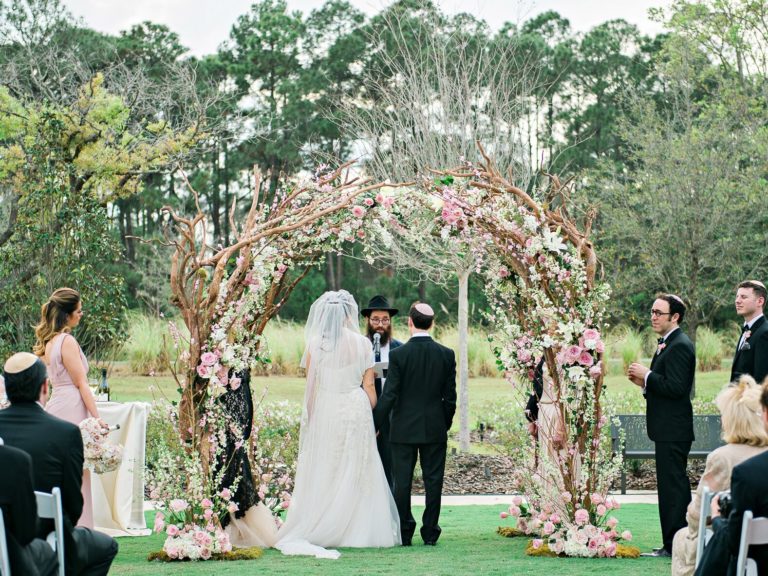 Weddings are beautiful moments in which we witness the agreement of two souls that they’ll spend the rest of their life together living in harmony and joy. Depending on what area of the world you live in, weddings can be something that look completely different to what we’re going to describe in here, or from what you’ve seen before in your country or city.

Today we are going to focus on wedding traditions, but not just any kind. We’re taking a look at some of the most interesting Jewish weddings and the things people do at them for good luck and such. Let’s see.

Why are traditions important?

Traditions are a major part of each culture, and if people aren’t regularly doing these, chances are that they will be forgotten after a couple of years. Many traditions that take place in countries across the world are already major tourist attractions, and this wouldn’t really be possible if the locals didn’t give their best to preserve them throughout the years.

Aside from the cultural value, traditions are just very fun to look at or even participate in them if the locals let you. It’s always very interesting to see how other nationalities are celebrating a certain holiday, or in this case, a wedding. Trick or treating is a tradition as well, except we’re so used to it that it is no longer very special to us. However, imagine how unique it looks to someone who comes from another part of the world where they’ve never heard about Halloween costumes and all of that.

With all of this being said, you’re probably already very interested in seeing some Jewish wedding traditions, so let’s not delay things any further and take a look at the first one.

Fasting until the first meal together

In Jewish culture, people consider the day of the wedding to be something called “a day of forgiveness”. This is why you will most likely see the couple that’s getting married to fast and not eat anything until the entire ceremony is complete and they can finally have their first meal together. This might not sound like anything special, but it is something that Jewish people pay a lot of attention to.

You’ve probably heard the Bible story where Jacob was tricked into stepping in marriage with a wrong person, which happened to be the sister of the one he was supposed to marry. This happened because the veiling wasn’t done by him, and she already had her veil on before he saw who he’s agreeing to step into marriage with. In order for such “trickstery” to be avoided, the groom is the one that veils the bride during Jewish weddings. While placing the Bedeken on the bride’s face, the groom also agrees that his love is for her inner beauty. Veils are not pre-determined and they can be chosen by the couple themselves, so if you are interesting in finding something like this, feel free to visit jewish.shop.

Signing a Ketubah – The agreement of protection

Although the Ketubah is not considered to be very religious documents, they do take part of the law which protects the Jewish civil rights. The things written on the Ketubah are basically agreements that the groom needs to sign, and they dictate some of the circumstances and conditions that he will ensure for the bride.

Before the couple gets married, there is a procedure called “A walk to the Chuppah”. After this, there is another process of exchanging vows under the exact same Chuppah, which is an object that symbolizes a home, but we’ll get to that in just a bit.

So, the walk to the Chuppah is a procedure in which the groom is being held from both sides by his parents, and escorted to the object. After the groom and his parents arrive, the same thing happens with the bride and her parents. When they finally meet under the Chuppah, the procedure of exchanging vows begins.

Now, about the object itself, it has four corners and something that looks like a roof. Like we said above, this is meant to symbolize a home that the couple is supposed to build together during their marriage. Now, here’s where things tend to get pretty unique and interesting. Most of the times, the Chuppah object is being held by other people, and this symbolizes that their friends and family will support the marriage and help them build the home together. In other cases, it’s a stationary object that is most of the times decorated with flowers.

Sometimes the rabbi, along with the couple’s parents will join the couple under the roof of the Chuppah, but this isn’t required and it also doesn’t happen that often.

This happens to be one of the most well-known rituals that take place at Jewish weddings. If you hear the phrase “Mazel Tov” being shouted by someone, it means that they’re wishing the couple a lot of good luck in the upcoming marriage. Before people shout out this phrase, usually there is a tradition of breaking a piece of glass that is held in a cloth bag.

Both the bride and the groom are supposed to step on the cloth bag in order to shatter the piece of glass in multiple smaller pieces, which symbolizes the destruction of the temple in Jerusalem, according to many. After this is over, people may choose to ask for a piece of the broken glasses in order to make some sort of a decoration from it for good luck. Usually almost everyone that was participating in the ceremony gets a piece of the shattered glass, and the couple gets to keep the cloth bag.